A Comparison Between Dc Switching Regulators and Linear Regulators

Electronic systems often require multiple voltages to power the various internal circuits. Non-isolated regulators are a common and easy way to convert one voltage to another. Regulators typically fall into two categories based on the method of conversion: linear or switching. Linear regulators have been around for a long time and are cheap and easy to use. However, the simplicity comes at the cost of low efficiency. Switching regulators on the other hand are more expensive and a little more complex internally but are significantly more efficient and capable of conducting large amounts of current without the same thermal concerns of a linear regulator. In this blog we will investigate why the efficiency is so different between these two regulators and the impact that can have on the end design.

To explain how the linear regulator works and why it is so inefficient, we will start with an example application (Figure 1). In this case we have a 24 V input that is being converted into a 6 V output with a 1 A load.

We can re-write this to solve for the output voltage.

From this we see that Vout is regulated by controlling the voltage across this transistor. Control of Q1 is accomplished using an op-amp, U1, and negative feedback. U1 senses Vout and compares it to a reference. If Vout is greater than the reference, then Q1 is driven less and the voltage across it increases. This causes Vout to decrease. If Vout was too low, Q1 would be driven more to lower the voltage drop across Q1, which would bring Vout up.

To see why linear regulators are so inefficient we need to look at the load current path. Because the op-amp, U1, has high impedance inputs and is only driving the base of the transistor, we assume that no current goes in or out of it. With the op-amp removed, all that is left is a direct path from input to output meaning that the input current equals the output current.

We can now use this information to calculate the efficiency and power dissipated by the linear regulator. The input power is equal to Vin times Iin.

The output power is equal to Vout times Iout.

And the efficiency equals Pout divided by Pin.

This results in a power dissipation equal to the input power minus the output power.

For a load of only 6 W, the linear regulator is dissipating 18 W of power. That is a lot of power to dissipate in such a small package without any heatsinking or airflow. A typical thermal impedance of 20°C/W, of a linear regulator in a TO-220 package, would result in a temperature rise of 360°C from junction to ambient if no thermal management was applied.

This would clearly fail if no measures were taken to reduce the thermal impedance, such as heatsinking or airflow. The addition of a heatsink and airflow adds to the size, cost, and complexity of the system, which negates many of the benefits of using a linear regulator (i.e. cost and complexity). For the current example, a heatsink may be required in addition to airflow.

One last interesting effect of the input current equaling the output current is that the efficiency calculation can be simplified to Vout divided by Vin.

From this we can see the greater the difference between input and output the lower the efficiency (Figure 2) and the more power will be dissipated in the regulator. Making linear regulators undesirable in cases with large input voltage to output voltage ratios.

The first major difference, and the reason that it is called a switching regulator, is that the transistor is driven such that it is either fully on (ideally a short circuit) or fully off (ideally an open circuit). This is compared to the linear regulator where the transistor is controlled linearly in between fully on or off states. This transistor is switched on and off at high frequency and creates a square wave at the node connecting Q1, D1, and L1, which we call the switch node (Figure 4).

The ratio of on-time to period is known as the duty ratio and, in the buck regulator, is equal to the ratio of output voltage to input voltage. For our example this results in a duty ratio of 25% to convert a 24 V input to a 6 V output.

To see why this circuit is more efficient than the linear we can look at the switching regulator in both its on and off states under the same conditions as the example we had for the linear regulator.

In the on-state, the transistor is driven fully on so that it represents a short. In this case current will flow from the input to the output, but the losses in the transistor are 0 W because the voltage across it is zero when current is flowing. The other elements in the current path (inductor, capacitor, and diode) are all ideally lossless and so during the on time, ideally no power will be dissipated.

This shows that in both on and off states, the switching regulator will ideally dissipate no power. This means that the upper limit of the efficiency is 100%, whereas the linear regulator has an upper limit equal to Vout/Vin.

As mentioned earlier, one of the main reasons that linear regulators remain so popular despite their poor efficiency is their cost, simplicity, and familiarity. However, as discussed above, the poor efficiency and associated thermal issues can necessitate heatsinking and airflow, which act against these benefits. Switching regulators are an efficient alternative and while they may be more expensive and complex up front, they can decrease system cost and complexity by reducing the need for expensive and bulky thermal management devices. To get a feel for just how much thermal management is required for the example conditions, Figure 6 shows a side by side comparison of a linear regulator with a heatsink that with forced air cooling would allow the same operating temperature range, as with CUI’s off-the-shelf switching regulator.

Checkout our CUI in the Lab video for a comparison between switching and linear regulators. 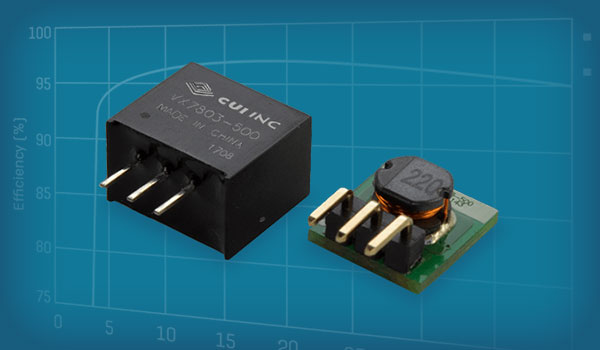 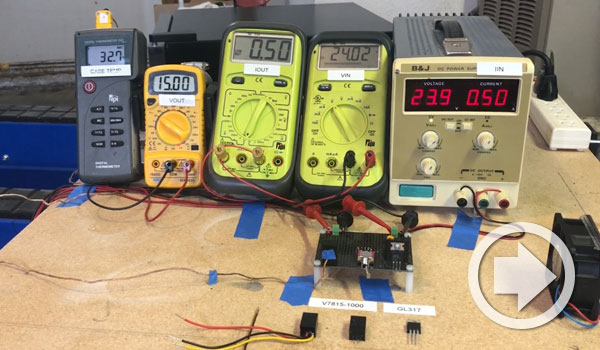 CUI in the Lab - Dc Switching vs Linear Regulators 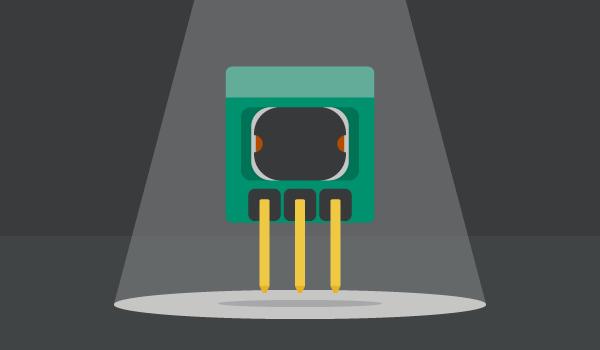