Temperature affects all components. It can cause their behavior to change, and at high enough temperatures will cause them to fail. In order to avoid unwanted behavior and potential failures, thermal limits are placed on components and systems as a whole. When it comes to power supplies, derating curves are often supplied, which inform the user of the thermal conditions in which it may safely operate given input and output conditions. Understanding these curves will help the user choose the proper power supply and ensure reliable operation in their application.

A Review of Output Power Derating

The actual components temperature (Tcomponent) may then be calculated by adding the temperature rise to the ambient temperature as shown in Equation 2.

From this, any change to the thermal impedance or power dissipation will cause a proportional change in a component's temperature (Equation 3).

For example, if a bridge rectifier, (with a thermal impedance from junction to ambient of 150°C/W), was dissipating 0.5W of power and operating at 50°C ambient, we would expect the component temperature to be 125°C (Equation 3).

Now if it was desired to increase the ambient temperature to 70°C while maintaining the component temperature, either the thermal impedance or the power dissipation would have to be decreased. For the user of a power supply, there are a few ways that these two variables may be controlled to accomplish this.

Because of the complexity in calculating power dissipations, thermal impedances, and junction temperatures throughout the power supply, manufacturers often simplify the problem by supplying users with derating graphs. These graphs are generated through testing and are intended to show the user how hot the environment may be that they are operating in while keeping all the components within their thermal limits. Even with this simplification, there are different ways the graph may be presented and different information that may be included from power supply to power supply.

The most common graph displays the allowable load versus ambient operating temperature. Figure 1 shows the derating curve of the VGS-250B Series power supply when operated without forced air cooling, typically referred to as ‘natural convection'. It tells the user that the power supply may be operated at full load up to an ambient temperature of 50°C without risking thermal failure of the internal components or shutdown due to thermal protection if applicable. Beyond 50°C ambient temperature, the power supply is at risk of thermal failure unless the load is decreased to a point at or below the derating curve. For example, if the ambient temperature is 60°C then the load must be decreased to 80% of its rated power or less to ensure safe operation. In many cases, as in this one, the benefit of decreasing the load only extends so far and eventually you will come to a hard limit beyond which the power supply should not be operated at any load (70°C in the case of Figure 1).

In some cases, multiple curves will be provided which correspond to different amounts of forced air. Figure 2 shows the derating curve of the VHK100W Series dc-dc converter. In this case, the temperature at which it may operate at full load is dependent on how much forced air is being applied. With no forced air (natural convection) the maximum temperature that the device can be fully loaded is 50°C. However if forced air of 3.5m/s were to be applied, full load could be achieved all the way to an ambient temperature of 78°C. In these instances careful attention should be paid to the units used to describe the amount of forced air. The graph of Figure 2 gives two sets of units, LFM and m/s, but often only one will be supplied and different units may be used from power supply to power supply.

Sometimes thermal limits have a dependence on the input voltage applied. In these cases you will see multiple curves corresponding to different input ranges. Figure 3 shows the derating curve of the VMS-300A Series under natural convection. For devices such as this, the maximum load can only be achieved at higher input voltages before thermal derating is taken into account. If operating this power supply between 90Vac and 200Vac with natural convection, the input must be de-rated to a 200W maximum. If operated between 220Vac and 264Vac it may be loaded to 250W.

The above derating curve (Figure 3) doesn't consider the ambient temperature or application of forced air. In cases such as this, additional derating curves will be supplied to show how much derating is required with respect to temperature and/or forced air cooling, in addition to the derating already applied with respect to the input voltage. In the case of the VMS-300A Series, the user is supplied with the additional curves of Figure 4. The curve on the left shows the relationship between load and ambient temperature for natural convection for the two voltage ranges obtained from Figure 3 and the graph on the right of Figure 4 shows the same information when 10 CFM of forced air is applied. For this power supply, the application of forced air allows the user to operate at the full 300W regardless of input voltage.

There are many conditions which affect the maximum operating temperature of a power supply. To simplify things for the user, manufacturers will often supply one or more derating curves to inform the customer of the relationship between certain conditions such as load, amount of forced air, and input voltage applied. Understanding and adhering to this information will ensure the safe and reliable operation of a power supply. 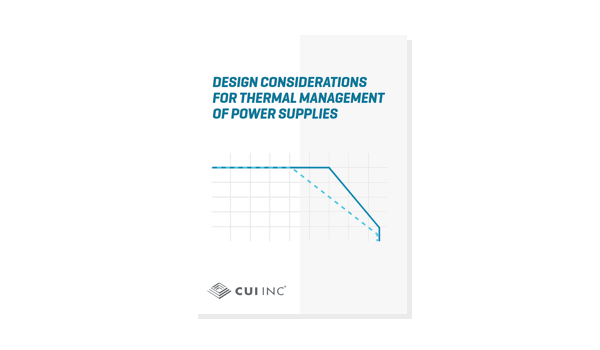 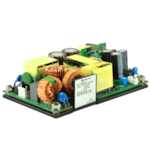 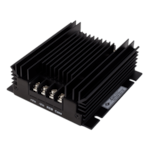 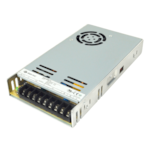